We have been honored and blessed to have a spectacular lineup of Diversity Day Conference Keynote Speakers over the last 18 years. In sharing their remarkable stories, insights and wisdom, they have helped to inspire all of us to be Men and Women with and for Others.
See below for a list of our most recent keynote speakers by year.
Please note that the biographies included below were provided to us by the speakers at the time they presented at our conference, so details may have since changed. 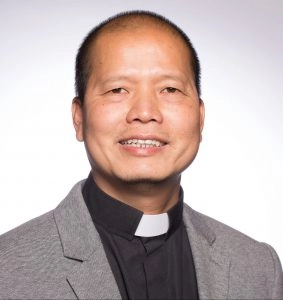 We are honored and thrilled to welcome keynote speaker Fr. Hung Pham, SJ to our 18th annual conference scheduled for February 14, 2023.

Fr. Hung Pham, SJ currently serves as the provincial assistant for Formation of the Central South Province of the USA (UCS). He accompanies young Jesuits; brothers, scholastics and young priests in their intellectual, spiritual and pastoral formation prior to being fully admitted to their final profession. Before moving back to the province, Fr. Pham spent seven years teaching Ignatian Spirituality at the Jesuit School of Theology at Santa Clara University in California. A Jesuit for 26 years, he taught biology and chemistry at St. Louis University High School and served as a teacher-trainer with the Jesuit Refugee Services in Thailand before studying to be ordained to the priesthood. Ministerially and pastorally, he has lectured and led seminars on different Ignatian themes and topics as well as directed numerous Ignatian workshops and retreats in Belize, Canada, Singapore, Spain, Thailand and Vietnam.
Learn more about Fr. Hung Pham, SJ

What is Diversity Day?

Diversity Day is one that we consider to be an intrinsic part of the overall education that we offer here at Regis Jesuit. Our mission is to educate the whole student with the goal of forming students who are open to all of the complexities of our world—a key component in the overall Regis Jesuit experience.

On Diversity Day, which takes place in February or March each year, students spend the entire day outside of normal class schedules choosing three workshops to attend that offer a mix of inspiring, complex and eye-opening personal stories and life experiences and provide a unique perspective on the world beyond our campus. There are also sessions that offer a fun and culturally enriching experience—such as making Chinese dumplings or learning the Brasilian Samba— encouraging students to learn about and embrace this amazing and diverse world we live in. Diversity Day is a cherished and favored day for students and presenters alike.

To see a full lineup of presenters and the variety of workshops offered to students, we invite you to view the 2022 Diversity Day Conference Workshop list.